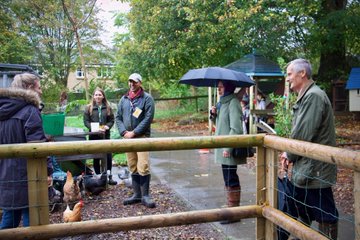 HRH The Princess Royal paid a visit to Oasis Southampton City Farm on Thursday, 29 October to meet ‘Young Farmers’, volunteers and staff as well as their Golden Guernsey goats, Shetland sheep, and Penny the pig.

The Princess Royal, who has long been a supporter of city farms, was presented with a handmade birdbox as a gift made on the farm by Andy Read, aged 28. Andy was injured in a car crash which left him with a brain injury. He is now a keen ambassador for the city farm helping on a variety of farm projects.

The Princess was shown the chickens by a group of farmers with learning disabilities who enjoy working every week and also met two ‘Young Farmers’ whose efforts helped the farm survive a loss of income during lockdown. George Heslop, aged 9, raised money by selling his drawings of the farm’s animals while Liam Dadd dyed his hair bright orange to raise money.

“It’s been great to show Her Royal Highness the diverse range of people we support and to celebrate our volunteers and young farmers who work so hard throughout the year caring for our animals and gardens. The public have been so generous and supportive, this year in particular, and every visit, donation and purchase on our city farm preserves this special place.”

The city farm relies on so many generous people, including Peter Turrall, aged 78 who has been a volunteer for over 15 years.

Oasis Southampton City Farm has a strong connection with Oasis Academy Lord’s Hill, where the Principal Rob Forder and three pupils Liam Dadd, Phoebe Dunster and Vinnie Goodman-Ziya representing the school on the occasion of the royal visit.